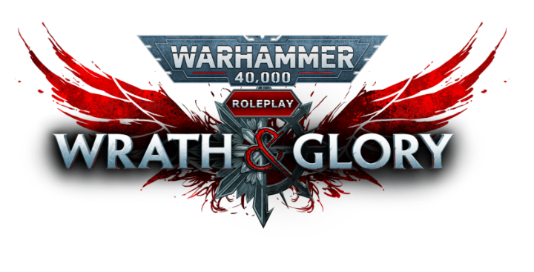 The sinister schemes of the Chaos Gods have shattered the galaxy. The Great Rift tore through space and reality, pushing mortal life to the precipice of oblivion. The Gilead System has lost contact with the vast Imperium, trapped in the silent darkness. As the shadows of extinction loom, hope fades but is not yet entirely extinguished. Rallied by the Rogue Trader Jakel Varonius, a disparate group are dedicated to doing what must be done to keep the Gilead System from being consumed by the darkness. Can they resist the machinations of Chaos as well as the plots of those who see the rift as an opportunity to further their own power?

Time is running out in the 41st Millennium. This accursed age needs heroes more than ever before.

Will you answer the call?

What Is Wrath & Glory?

Warhammer 40,000 Roleplay: Wrath & Glory gives you the freedom to roleplay Warhammer 40,000 your way. Sit down with your friends, decide what kind of story you want to tell, and assemble your squad from a host of iconic Archetypes. Warhammer 40,000 is a vast and phenomenally exciting setting, offering up a massive range of customisable characters to play and a million ways to adventure.

A new era has dawned, and the galaxy is more dangerous than ever — the perfect time to dive into epic and terrible tales. The vastness of space is rife with opportunities for exploration; can your Rogue Trader find profit from an Aeldari alliance? What strange xenos will you find (and purge) with your Inquisitorial retinue? Where will you get enough red paint to make this Kill Kroozer go faster? 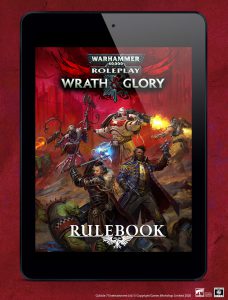 Most games of Wrath & Glory will take place in the Gilead System, a flickering candle of light in the darkness of Imperium Nihilus.

The Great Rift is a daily threat to the citizens of Gilead. A scar across the sky of every world, the impossibly large Warp storm is a daily reminder of the pervasive threat of Chaos, as well as the incredible importance of their home. Their few but diverse worlds stand as a bastion of hope against the darkness — if the propaganda of the Adminstratum is to be believed. Under their honeyed words lies the truth: the Gilead System is cut off from the light of the Emperor, they have no reinforcements, no means of leaving the system, and no communication with the wider Imperium. They are but one of countless forgotten systems.

Though alone in the darkness of Imperium Nihilus, the Gilead System boasts an unusual variety of planets. An ancient Forge World filled with the strange wonders of the Adeptus Mechanicus. A feudal Knight World defended by barons piloting colossal battle suits. A bountiful planet dedicated entirely to food production, another colonised only to further worship the God-Emperor, and more — all packed with opportunities for adventure.

Wrath & Glory uses a d6 dice pool system that will be instantly familiar to Warhammer 40,000 players and easy to learn for anyone else. There are a lot of cool features to the system, and learning is far more fun when you’re actually playing! We’ve highlighted some of the basics here; read Sarah Kaiser’s incredible comic over on the Warhammer Community website for a great introduction to the game.

Whenever your character tries to do something and the result is uncertain, you roll a Test based on your character’s Attributes and Skills. A result of 4 or 5 on a dice counts as an Icon. Get more Icons than the Difficulty Number, and you succeed at whatever you’re trying to do. Results of 6 count for 2 Icons, and can also be used for extra effects, like gaining more information from a task, or doing it quicker.

‘Your communion with the machine spirit was successful, but you didn’t just open one door – you hear another slide open, and another, followed by the unmistakable skittering of chitinous claws on plascrete heading towards your warband!’

Combat is fast, fluid, and undeniably deadly with powerful weapons, bolters, and brutal critical hit tables — just what you’d expect from Warhammer: 40,000. Interaction Attacks let characters who aren’t 7-foot tall ceramite-clad transhumans get in on the fun too. Use your Tech Skill to distract an enemy with a Cherub, or Intimidate them with your Commissarial presence.

The war-torn galaxy of the 41st Millennium is filled with different factions, and often those groups are in conflict. By deciding with your group what kind of adventures you want to go on, you can make sure your characters don’t clash and you’re playing the game the way you all want to. That’s what Frameworks are: a guideline for creating characters and adventures that make sure your squad of Astra Militarum Troopers aren’t hanging out with an Ork.

The grim darkness of the 41st Millennium awaits you, and there’s plenty of material to get you started and run epic dark sci-fi adventures in a perilous setting. Build characterful Archetypes with the Rulebook and the expanded material in the Forsaken System Player’s Guide, jump behind the GM Screen with exciting adventures from Litanies of the Lost, or engage in vehicular mayhem with Church of Steel!

You can find the full Wrath & Glory range on our webstore here.