Welcome Back to the Old World!

The fourth edition of the original dark fantasy roleplaying game, Warhammer Fantasy Roleplay takes you back to the world where Chaos never sleeps. Drawing inspiration from the legendary early publications of the grimdark RPG, WFRP brings innovative twists to build on the beloved classic.

The Empire of Karl Franz stretches from the Sea of Claws in the north to the Black Mountains in the south, and beyond that perilous range, the wild and untamed lands of the Border Princes. It is a beacon of civilisation in an untamed world. Sigmar, its founder, is now a god, his influence still shepherding his chosen peoples. From mighty Altdorf, all are fairly ruled, from the poorest citizen to the most luminous noble, each a proud heir to Sigmar’s glorious destiny.

That, at least, is what the child and the sycophant claim. The truth of life in the Empire is rarely glorious, often short, and never without peril. If you wish to climb out of the gutter, you better have the coin to pay for the privilege, or failing that, a blade to cut your way free. The Empire itself is a fractious mess, a handful of Great Provinces vying for power and always with a keen eye toward snatching any advantage from a neighbour. The nobility are witless hedonists, or scheming misanthropes, heedless of the suffering left in their wake.

This cankerous state cannot go on, and indeed revolutionaries whisper of a better world. Some preach that ancient and terrible gods, the ruinous powers of Chaos, offer the only hope of change. They whisper sweet succour and velvet promises, embracing the witch, the mutant, and the heretic. Their secret plots and unseen deeds suffuse the Old World, and patiently they await that prophesied day when they will arise from their secret places and throw down the works of Man, and Elf, and Dwarf, to usher in a terrible age of Chaos.

From this tangle of political machinations, hidden cults, and foul ambition, a scant handful dare to hope for something more. Ordinary folk who refuse to accept their lot in life, who dare to hope for a better life. Whether by sword or by flame, by hidden betrayal or by tremulous sin, they mean to claim it. Most will perish, and a few will wish they had. The rest? Well…

There are no heroes here — only those with the mettle to survive and prosper. How will you fare in the Grim and Perilous Fantasy world of Warhammer Fantasy Roleplay !

The world of Warhammer has a decades-long legacy of great games, spectacular storytelling, and awesome adventures. Our creative team are lifelong Warhammer fans and hobbyists — we haven’t just played all three previous editions of Warhammer Fantasy Roleplay, between us we’ve worked on many of them too! We love Warhammer, and hope it shows through the game.

So, stick a feather in your hennin hat, grab your zweihander, and unleash your small but vicious dog; it’s time to stand against Chaos — or at least put a few pfennigs in your pocket.

WFRP provides a deep, flexible system that allows for fast paced combat without sacrificing detail. Armour covers specific hit locations only, and devastating critical hits can leave arteries severed, fingers mangled, and heads flying… A single roll system lets you know if you have hit, and how much damage you’ve achieved, with just one throw of the dice. The Advantage system lets you gain the upper hand against outmatched opponents, quickly bringing combat to a thrilling and satisfying conclusion.

Skill tests are quick and straightforward, with an intuitive percentile system giving you a quick pass/fail answer to Simple Tests. Dramatic and Opposed Tests allow you to test the degree of your success or failure, and compare that to an opponent to see which of you is victorious and by how much.

Magic in the Old World is pure, distilled Chaos, and it is an ever perilous pursuit. While the Channelling system allows a Wizard to gather their power for a devastating onslaught, all those who wield the Winds of Magic must remain wary of a Miscast that can result in unpredictable, bizarre, and potentially deadly effects.

We’re constantly working to expand and perfect the WFRP 4e game system — check out Up in Arms for more in depth combat, Winds of Magic for expanded arcane activities, and The Imperial Zoo for an even bigger bestiary!

The Bad Moon rises, the Winds of Magic blow, and ears are turned by the murmurs of the ruinous powers… The Old World is famed for its originality and richness, and we’ve brought that to the fore. From our Starter Set, to the award winning Rulebook, the GM Screen, and the Enemy Within Campaign, there is something for everyone. You can find the full WFRP range on our webstore here.

The Enemy Within Campaign

The Enemy Within is the revised and updated Director’s Cut of one of the most highly regarded roleplaying campaigns ever written, a five-part epic that inspired a generation of gamers. The Enemy Within Campaign consists of 5 adventure books:

To help you get the most of these 5 fantastic adventures and provide a wealth of additional content we couldn’t help releasing for the campaign we hold so dear, we’ve also created a set of companion books for each episode of the Enemy Within. Check them out here.

So, gather your heroes as you take them from humble beginnings as penniless adventurers to the halls of the great and powerful, where every decision can change the fate of the Empire!

To get started, why not download some of our excellent free adventures? Ubersreik Adventures: If Looks Could Kill, written by Warhammer veteran Dave Allen, is designed with beginner Characters in mind, and concludes in the fortress-town Ubersreik, where the Characters’ adventures can continue with the WFRP Starter Set.

Download If Looks Could Kill below or from DriveThruRPG here.

Night of Blood is one of the most played WFRP scenarios of all time. It was originally written over thirty years ago by Jim Bambra for the game’s first edition and has been a firm fan favourite ever since.

Download from our webstore for free here or from DriveThruRPG here.

You can also download our handy free Conversion Tables for Warhammer Fantasy Roleplay here. This document is a useful addition for any Grognard who wants to dust off a beloved Character and take them through a new adventure in the Old World, or for newer players who wish to delve into some of the earlier edition PDFs Cubicle 7 has made available!

Check out our free resource section here for character sheets and more! 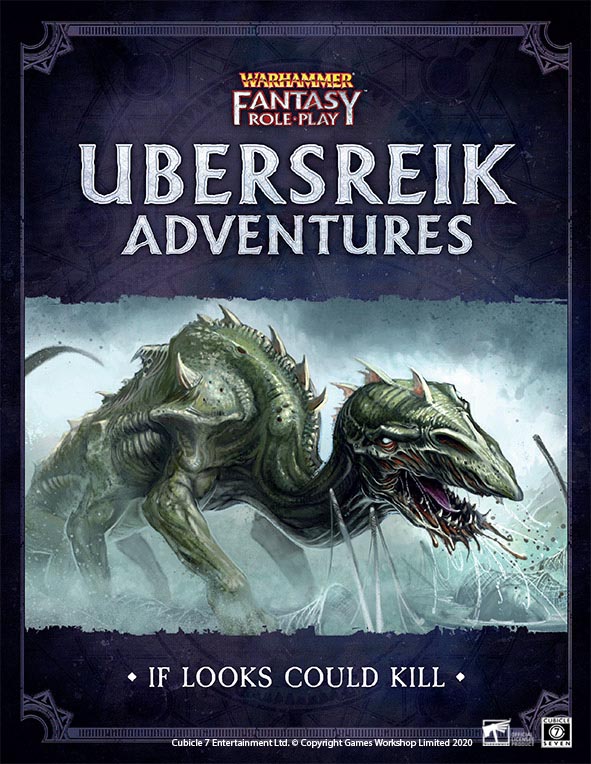 Looking for more great WFRP content?  You’ll find lots of blog posts and articles here and find our WFRP FAQ here. We also share updates via our social media pages, especially on #WFRPWednesday. Why not check out our Facebook, Twitter and Instagram pages now?