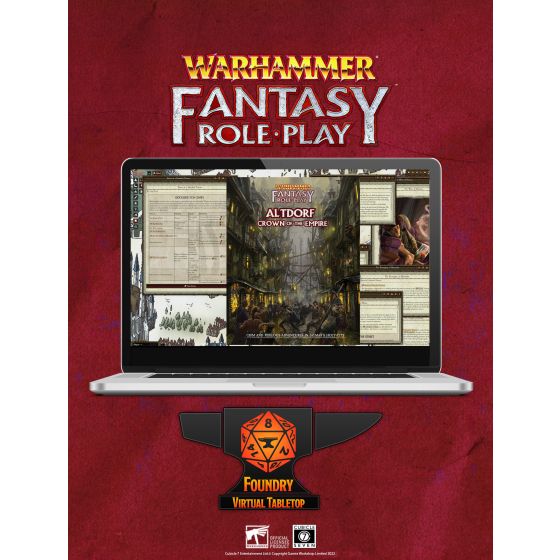 This item is the digitized version of Warhammer Fantasy Roleplay Altdorf: Crown of the Empire for Foundry Virtual Tabletop.

Altdorf is the capital city of the Empire and the birthplace of Sigmar Heldenhammer. It is the most populous city in the Old World, and the site of several famous and majestic landmarks. The Imperial Palace and the Grand Cathedral of Sigmar are monumental edifices, larger than whole districts of smaller cities. The Colleges of Magic tower over the banks of fog that blow in off the Reik, venting gouts of sorcerous fire and fume. Altdorf has another side to it, in the teeming rookeries of the East End and the bustling Dockland to the north, gangland intimidation and revolutionary fervour are felt more keenly than the word of Sigmar’s priests, or the rule of the Emperor’s laws. Altdorf: Crown of the Empire is a fascinating and entertaining 224-page guidebook to the capital.

Standing on the confluence of two of the greatest rivers in the Empire, Altdorf is a nexus of power: government, religion, magic and military. Each district is carefully detailed with a wide variety of locations, plot hooks, and NPCs. A beautifully illustrated map, provided with both GM and Player versions, shows off the expansive city in exquisite detail. Whether Players wish to explore the Street of a Hundred Taverns, involve themselves in intrigues at the Imperial Palace, seek to topple the established order alongside Altdorf’s revolutionary factions, or dominate the city’s underworld as part of the warring dockland gangs, the book has all you need. Altdorf: Crown of the Empire is extensively researched; combining details derived from over 30 years, including stories, sourcebooks, and roleplaying scenarios, with new material to create the ultimate sourcebook for thrilling adventures in the capital.

Old favourites such as ‘Filthy’ Harald Kleindeinst and Rosanna Ophuls are updated to be used in the fourth edition of Warhammer Fantasy Roleplay. Characters from Warhammer Fantasy Battle with links to Altdorf, such as Reiksmarshal Kurt Helborg and Supreme Patriarch Thyrus Gormann, are described in detail. A host of new NPCs have been added to illustrate the vast diversity of folk who call the capital their home. Whilst Altdorf: Crown of the Empire contains enough plot hooks and interesting locations to be the site of hundreds of adventures, it is also a perfect complement to the Enemy Within campaign. The Characters may turn the fleeting visits to Altdorf described in Enemy in Shadows, Death on the Reik and Power Behind the Throne into detailed explorations. The capital will also play a pivotal role in the forthcoming fifth part of the campaign, Empire in Ruins. Altdorf: Crown of the Empire includes:

Altdorf: Crown of the Empire is an excellent and entertaining addition to any gaming table. Packed with esoteric lore, suspicious NPCs, distinctive locations, and intriguing adventure hooks, it is the perfect guide with which to add additional depth and detail to your games of Warhammer Fantasy Roleplay! This Foundry VTT module contains:

Foundry Virtual Tabletop works using modern web technologies where one player (the host) runs an application which hosts the game server and other players can connect using a web browser. As a “virtual tabletop”, the software provides a set of digital tools which are designed to imitate and expand upon the experience of playing a game in-person with your friends. Support for character sheets, rolling dice, exploring battlemaps, and moving heroic tokens are just a few of the many features which enable this experience. Foundry Virtual Tabletop goes well beyond the basic feature set, however, with rich dynamic lighting, fog of war, audio playlists, video chat using webcams, and way more. Foundry Virtual Tabletop gives you everything you need (and then some) to forge thrilling and memorable moments with your gaming group! For more information check out this handy FAQ. Register for a Foundry Virtual Tabletop account here or purchase a software license for $50 (+VAT)  here to run games for your group. Then you can purchase the Warhammer Fantasy Roleplay modules from $14.99 (intro price, + VAT if applicable) directly from cubicle7games.com.