WFRP: It's not easy being Elven 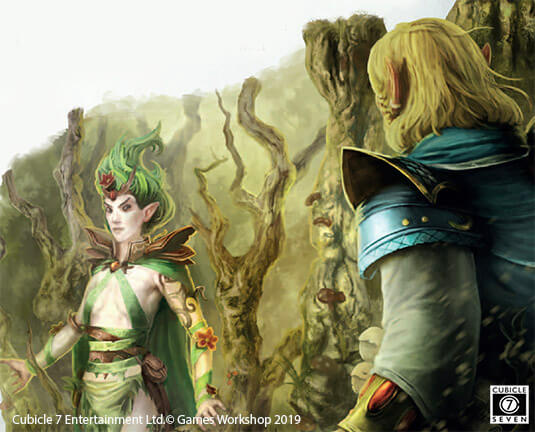 We hope you have enjoyed the last few in-depth WFRP blog posts from C7 writer, Ben Scerri. If you missed any, you can catch up on post one here, post two here and last weeks post right here. Today, Ben is discussing all thing Elven! As always, we love to get your feedback on Facebook and Twitter!

Hello again, folks — I’m back to talk WFRP! One of my favourite things about the Warhammer world is how it handles differences between different peoples. As a 2nd-gen immigrant in Australia, I’ve experienced that first hand, and despite there being a lot of animosity between the different species in the setting of Warhammer, it’s handled in a very interesting, accurate, and empowering way.

This collides with a topic of debate I’ve seen a lot online — ever since 1st Edition found its home in the dark corners of the burgeoning Internet. What debate is that, you ask? Well, the 'fact' that Elves are overpowered! So, today, I’m talking maths as well as fiction because I’m a firm believer that the two live side by side, and that the fiction is itself a mechanic.

Let’s dive in, shall we?

“Every pose is a power pose when you’re an Elf…”

What’s So Great About Being An Elf?

Let’s start with the maths: after all, the arguments I’m about to make are about why the maths isn’t important, but if you don’t know what it is… well… it wouldn’t be a very well rounded argument now, would it?

Take a look at the Attributes Table on page 33 of the core book:

Focus on the bonuses, and ignore the dice, as they’re always the same range of results. Here we can see that, while Dwarfs and Halflings also have Characteristics above the Human average of +20, the Elves don’t have any below +20… In total, Humans get +200 points of Characteristics, Dwarfs get +240, Halflings get +230, and Elves get a whopping +280!

Looking at the other stats, Elves get the same Wounds as Humans and Dwarfs, which given their extra buffed stats results in an average Wounds for each species being: 12 for Humans, 16 for Dwarfs, 10 for Halflings, and 13 for Elves.

Elves also get +1 Movement on top of Humans, thus +2 on Dwarfs and Halflings, making them quite difficult to pin down if they choose to ambush at range with a bow and arrow…

The only place where the Elves really fall down is Fate, Resilience, and Extra Points: Humans get a total of 6 points, Dwarfs get 4, Halflings get 5, and Elves get 2.

Honestly, at this point, I’m wondering why folks aren’t calling foul on the Dwarfs more than anything!

Elves look to be pretty powerful, though that Fate/Resilience deficiency is going to seriously hurt if the Elf ever gets… well… seriously hurt. They can definitely dish out a blow, but if things go wrong for them, they go wrong in a big, quick, messy way. Which is pretty spot on, given the history of the ancient species, right?

But, as I always say: if you’re getting into a fight you weren’t prepared for, you’ve already done something wrong. Combat being deadly is a truth for everyone — hell, I wrote a whole article about that earlier!

...what’s not to love about being an Elf?

Which brings me to the real kick-in-the-teeth that is being an Elf in the Empire. Or, rather, kicks in the teeth, for they are legion, all-consuming, and inescapable. Being an Elf isn’t like being a Dwarf — an ancestral friend and ally of the Empire, ubiquitous with its foundations — or a Halfling — directly tied and nominally citizens of the Empire themselves, so common in fact that they’re rarely regarded with anything greater than a snort of derision. That’s not to say that Dwarfs and Halflings don’t face their own issues in the often-backwards, hyper-conservative Empire, but Elves face something else.

The Enemy Without: Extreme Prejudice

Elves face extreme prejudice in the Old World (though, to be fair, they dish out as much as they get if WFRP page 311 is to be believed!), which tends to focus on two key aspects of their species: their history of conflict with the Dwarfs and the Empire, and their stark inexplicable differences to Humanity.

Let’s put our Archaeological Anthropologist Hats on for this (and, it being Warhammer, let's pop a skull, dagger, and enormous feather on that hat, too!), and let's have a super-brief run-down of the history of the Old World.

This history has left many sore spots for everyone involved: ancient grudges between the Elves and Dwarfs, anger from the Elves against the Humans for settling in ‘their’ lands (remember, they’re much longer-lived, so for them, it hasn’t been that long since they lived in the Old World), and fear from the Humans directed at the Elves (for Wood Elves continue to protect their hidden glades, and pursue their own interests, entirely from the shadows). The longevity of the Elves, the continuing grudges of the Dwarfs, and the miscommunications everywhere have led to a situation where there are no right or even easy answers, and there are few interested in talking it through.

These issues are exacerbated by the fact that, even if they did talk the situation through, the three species — specifically the Elves and Humans — have so little in common that it’s unlikely either side could even understand each other. How do you reason with someone who can just wait 50 years for you to die of old age so that they can win an argument, all without batting an eyelid? How do you explain to someone that, despite their family having lived in a village for 100 generations, you yourself lived there first! This is just the tip of the iceberg when it comes to the many philosophical, cultural, religious, and biological barriers between the two species.

But, when all is said and done, the Humans of the Empire are much more numerous, rumbering in their many millions, and the Elves just have to get used to that... but the folk of the Empire aren’t making it easy. In the Empire, Humans throw their fear and ignorance in the faces of their Elven 'friends' on a daily basis, which makes what compromises the Elves may make even more difficult in the face of all the hatred and violence.

AKA: The Ramifications of Immortality.

But it's not just the Empire, Elves also have to navigate their own society, which is complex, arcane, and built on a foundation of effective immortality. Consider your own familial obligations: you might call your Mum and Dad every few days or weeks, you might have kids you need to take care of, friends you want to see, maybe grandparents who you love and care for. Now consider if every generation of your family is still alive… Your mother, your mother’s mother, your mother’s mother’s mother. Now consider your spouse's parents. And all of your cousins. And all of your cousins’ parents, and so on and so on.

Elves live in a society clogged with obligations. Indeed, we made this mechanical! Check out page 195-196 — Elf Improvement and Elf Esteem!

Now consider how your family acted when you were young, and told you what they dreamed you’d be when you grew up. Immigrant kids out there will know what I’m talking about, because the stereotype is often true, but all families have these sorts of judgements and expectations placed on their children. They want you to be a doctor, or a lawyer, fantastic at music, and a great athlete. Amplify your familial pressures by the above orders of magnitude from having a very extensive family tree who are still hanging around, many centuries after they were born, all redolent with centuries of great deeds and extraordinary experiences!

And if you think all of this is spitballing? Look at the Random Careers Table on pages 30-31. There are 64 base Careers in the core book, of which Humans have access to 63, Dwarfs 47, Halflings 48, High Elves 35, and Wood Elves 22! Now you might say 'Well, that’s just how those societies work — High Elves don’t have Stevedores, and Wood Elves don’t have Charlatans', to which I say… Yeah… Exactly... That’s my point.

Elven society is mired not just in obligation, but also in judgement. Some things are just not done. Elves, despite living essentially ‘forever’, are far from free. They’re far from the freedom of Humanity, because, as they like to remind the other species, their lives mean something.

To be an Elf is to navigate a truly different existence — an alien culture with its own benefits and pitfalls. The statistical benefits of being an Elf are counterbalanced with the social and cultural barriers that they face just by existing.

Whilst nowhere near as extreme (I mean, we’re still Humans after all), I often see a lot of parallels between this experience and my own, and those around me. Minority cultures face challenges from without and within, and also have our own strengths to cling to. And just like the High Elves and the Empire, everyone does better when we work together.

I hope this brief dip into the Elves makes you appreciate them a little more, and has given you a new perspective on what it means to play an Elf. Just thinking about this makes me want to roll one up right now!

If you’ve got any questions about how Elves relate to the Old World, head over to our social media channels on Facebook and Twitter, and we’ll get right to answering them (as soon as we can find the Asrai, Asur, or Eonir to ask them, that is).

Oh, and as a final aside, this article didn’t even touch upon magic, and the Elves close association with it, and the close association magic has with Chaos. That’s always a popular topic of conversation for passing Witch Hunters and hardline Sigmarites. But we can cover this in another post, eh?

Until next time, folks!