WFRP Folk and Folklore of the North: Part 5 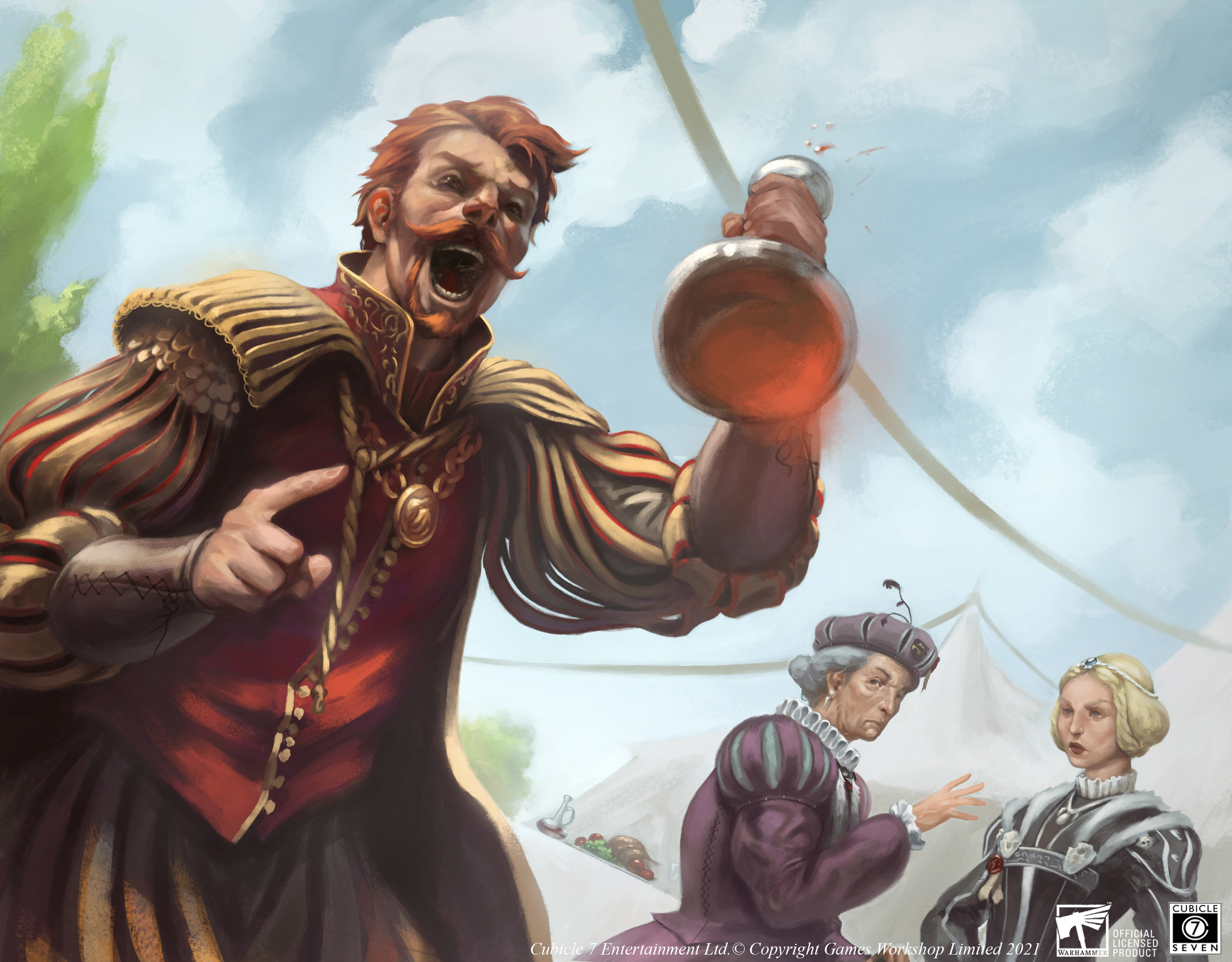 Today, WFRP developer Dave Allen is back with another exciting Folk and Folklore blog post. If you missed any of Dave's previous Folk & Folklore posts you can catch up here.

Folk and Folklore of the North: Part 5 – Middenheim’s High Society

‘The Middenheim Garden party! As state occasions go, it is small, but don’t doubt its significance. I remember attending in 2508, a happier year for the Graf. And what an occasion — the young “Princess” Katarina was presented to society. A delegation of Middenheim’s Dwarfs presented her with a glorious necklace that they claimed was magically charmed to protect her. Of course, the event was almost marred by a dreadful oversight of the visiting Lector Aglim. He sipped his Riesling before Ar-Ulric had finished a traditional toast to the lessons learned at the teeth of Horros. A forgivable mistake you say? Well that may be, but just such a forgivable mistake is said to have played a part in the onset of the Age of Wars, don’t you know.’

Courtiers used to Altdorf’s and Nuln’s glittering palaces may gossip that the only thing particularly ‘high’ about Middenheim’s high society is the fact that they are perched on top of a steep mountain — but the Grand Carnival gives the Graf the perfect opportunity to make an ostentatious display of his majesty and largesse.

The Carnival offers all manner of entertainment, but any visiting dignitary, or skilled social climber,  will ensure to be seen at the Garden Party — if they can wrangle an invitation. It may lack the excitement of Middenball matches and the thrill of Minotaur fights, but there is no better place to network with Middenheim’s movers and shakers.

Of course, if an attendee is to acquit themselves well, they must be on their very best behaviour. Boors and braggarts will be given the cold shoulder, and may even be escorted from the grounds by member of the Knights Panther.

Once trust is established, however, there is no better place to eavesdrop on the latest gossip, and observe Middenheim’s rulers’ careful interactions. With divisions in the Empire becoming more apparent, and rumours rife, many are anticipating sparks to fly. Will the representatives of Middenheim’s Dwarf community accost the court minstrel over his supposed support for discriminatory taxes? Will Ar-Ulric exchange words of friendship or hostility to the Sigmarite High Capitular?

(It would befit personages such as Ar-Ulric to refrain from any interaction that might risk his reputation.) Art by Álvaro Jiménez Hernández

The Garden Party is the perfect venue for inquisitive Characters who seek to get to the bottom of why Middenheim has been so troubled of late. Will they eavesdrop on conversations between aristocratic ladies and gentlemen without arousing suspicion? Will they come across some indiscretion in progress within the hedge maze? Will they win an attendee’s lasting gratitude by sparing them some social embarrassment?

The Power Behind the Throne Companion takes a deeper look at the exciting events and diverse personalities introduced in Power Behind the Throne. GMs who wish to turn the Garden Party into a detailed occasion in which many intrigues and secrets can be discovered through careful (and diplomatic) investigation will be richly rewarded. A detailed section of the book examines several members of the supporting cast, such as High Matriarch Isolde Begegnen, Hausmeister Breugal, or the woman of mystery known only as Nastassia, and deftly examines their motives and suspicions to the same fine level as the major NPCs in Power Behind the Throne.