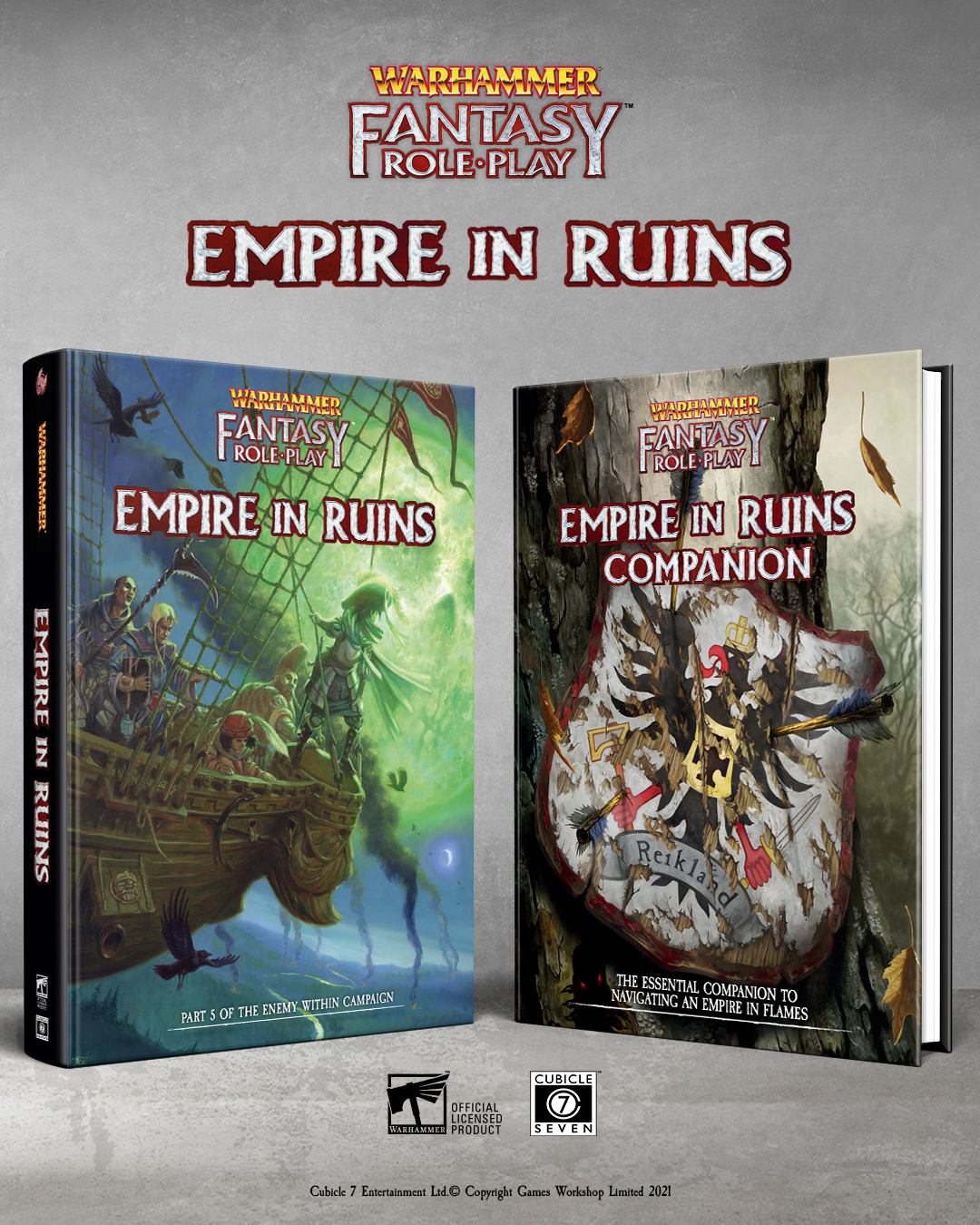 We know you have been waiting for this one and we are beyond thrilled to release the final part of the epic Enemy Within Campaign today.

If you have already advance pre-ordered the Companion or the Collector's Edition, you should have received an alert to download your file.

The Empire in Ruins Companion is the fifth and final of our five-part series of companion volumes to the Enemy Within campaign. The essential companion to campaigning in a shattered Empire is packed with supplementary material to not only expand Empire in Ruins but also provide an indispensable guide to any WFRP games set within the fractured nation.

Buy the PDF only on our webstore here.

Buy the PDF Only on DrivethruRPG here.

An indispensable guide to the final part of the epic Enemy Within campaign, the groundbreaking Warhammer Fantasy Roleplay adventure that inspired a generation of gamers. Packed with additional rules and sound advice for new and veteran GMs alike — it’s the perfect addition to enhance your experience of The Enemy Within, or any other WFRP adventure.

Also included are three adventures, the lasting impact of the Turmoil that shakes the Empire, the looming threat of the Red Crown, and more details on Zuntermein, Wasmeier, Lieberung and the ramifications of their various ambitions.  The Empire in RuinsCompanion is the perfect addition to any group playing The Enemy Within or any other campaign set within this fractured nation.

Empire in Ruins is the fifth volume of the revised and updated Director’s Cut of The Enemy Within, one of most highly regarded roleplaying campaigns ever written. After the events of The Horned Rat the heroes have won the respect and trust of many in Middenheim, but before they can capitalise on their renown the Empire descends into the turmoil of civil strife.

Buy the PDF Only on our webstore here

Buy the PDF Only on DrivethruRPG here

In the final part of the five-part series of grim and perilous Warhammer Fantasy Roleplay adventures, a number of threats that the Characters may have thought far behind them reassert their influence. Icons of authority and leadership are found wanting, and the greatest nation in the Old World appears destined to shake itself to pieces. Only by undertaking a dangerous journey can the Characters prevent the ruination of all they hold dear.

One of the best-known fantasy roleplaying campaigns, all roleplayers should play The Enemy Within at least once in their lives. Cubicle 7’s Director’s Cut provides more options, guidance, and detail than before, making Empire in Ruins and other episodes in this epic series an essential purchase for gamers.

The Enemy Within Collector’s Edition contains the revised and updated Director’s Cut of one of the most highly regarded roleplaying campaigns ever written. This beautifully finished, exclusive Collector’s Edition set includes The Empire in Ruins and the Companion presented in a slipcase featuring the artwork from the standard editions.

Beautifully finished in Silver foil and a lustrous Spot UV finish, the Collector’s Editions covers depict the image of Sigmar Heldenhammer and a manipulative servant of Tzeentch.

As with previous volumes in this series, the books are case bound, and come with an exclusive envelope of player handouts and maps. We love creating these Collector’s Editions, and know that they’ll take pride of place on bookshelves for years to come.

The Empire — is there a greater nation in all the Old World? From the Sea of Claws in the north to the Border Princes to the south, the Empire covers a vast swath of territory. Mighty rivers and muddy roads weave their way through looming forests and rolling hills. Each of the Grand Provinces has its own character, from the Reikland’s refined citizens to Sylvania’s cursed nobility.  Though beset with internal 3strife, the provinces still consent to be ruled by a chosen Emperor. The Empire has seen off external threats from Orcs, Bretonians and the madness that roils forth from the Chaos Wastes, but how much longer will it stand against The Enemy Within?

A beautifully illustrated map by renowned artist Jared Blando, this fine piece of stunning cartography, commissioned in 2513 IC, shows off the Empire in all its glory. It is the perfect accompaniment to any WFRP campaign, with enough detail to explore provinces far beyond the Reikland. The carefully illustrated map provides the perfect backdrop for the Enemy Within, the epic five-part campaign that defined roleplaying for a generation.