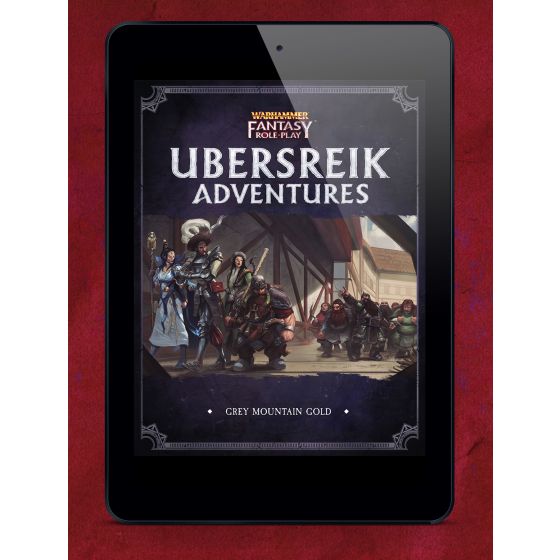 This item is the digital PDF of WFRP Blessing that Drew Blood redeemable via direct download.

Like most cities in the Empire, Ubersreik is home to a tight-knit community of Dwarfs. Many of these Dwarfs used to live within the holds of the Grey Mountains, but now a number of the fortresses lie forgotten and abandoned, overrun by Goblins and worse.

Terrific tales are told of the vast treasures that can be won by adventurous folk willing to plumb the depths of the lost holds. When a Dwarf named Belgrin Belbaksson boasts that he possesses the only map to the lost Dwarf treasures, he soon attracts a number of enterprising folk who anticipate a golden opportunity. But Ubersreik’s Dwarfs do not look kindly on those who would rob them of what is rightfully theirs.

Grey Mountain Gold is a gripping adventure by Mac Dara Mac Donnacha. It describes the trouble that might arise from a hastily planned expedition to recover loot from the lost holds of the Dwarfs. It’s also a cautionary tale to remind folk not to mess with the Dwarfs, or those who might seek to acquire their treasures! It is set in Ubersreik, but could be relocated to any suitably large settlement of the Empire within striking distance of the mountains.

This item is the digital PDF of WFRP Blessing that Drew Blood redeemable via direct download.