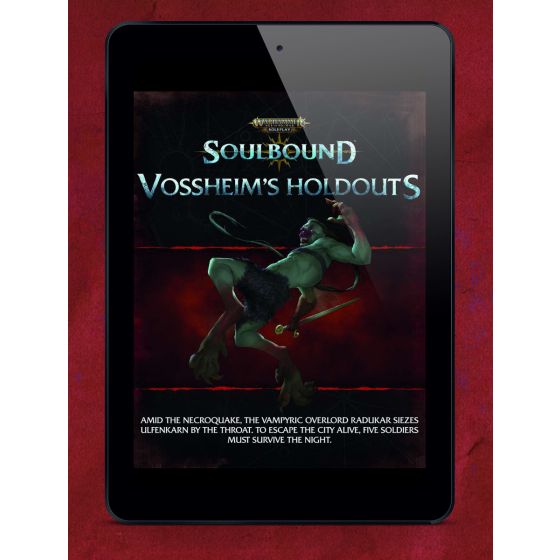 As the Necroquake takes hold of Szargarond, the undead rise from their graves and attack the living. In one city, a vampyric overlord called Radhukar the Wolf seizes the opportunity to claim the city of Mournhold for himself. Down in the corpse-riddled streets, a band of desperate soldiers seek to escape the cursed city. As the light dims, they have no choice but find somewhere to hold out until dawn…

Vossheim’s Holdouts is a horror-themed one-shot adventure for Warhammer Age of Sigmar: Soulbound. The adventure pits a motley crew of ‘grim and perilous’ soldiers against Radukar’s undead hordes during the Necroquake and his usurpation of the city of Mournhold - soon to be renamed Ulfenkarn! You and your allies are tasked with reinforcing an eerie mansion against hordes of undead enemies, during a night you’ll never forget. Will you survive? Or will you join the ranks of the undead?

Vossheim’s Holdouts works perfectly as a stand-alone adventure, a break from your regular Soulbound game, or as a prequel to future adventures in Ulfenkarn: City at the Edge of Death.