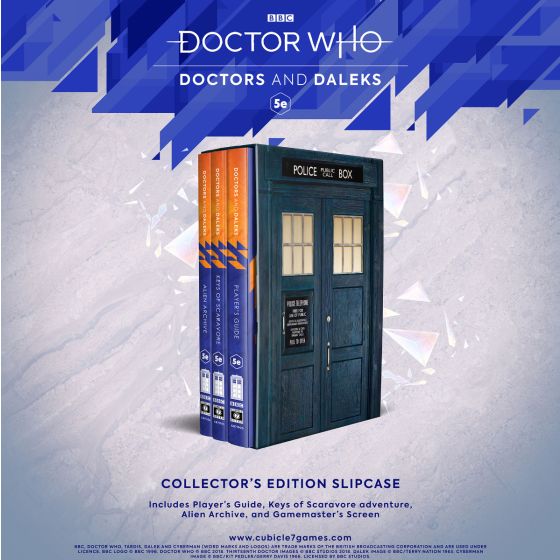 The exclusive Doctors and Daleks Collector’s Edition Set contains the Player’s Guide, The Keys of Scaravore, Alien Archive and the Gamemaster’s Screen.The three books are beautifully finished, featuring stylish artwork that is instantly recognisable as Doctors and Daleks, with spot UV highlights.

While the book content remains the same as the standard editions, this exclusive Collector’s Edition presents all three books, plus the Gamemaster’s Screen, in a stunning slipcase intricately designed to reflect the exterior of the Doctor’s TARDIS.

We love creating Collector’s Editions, and know that this one will take pride of place on bookshelves for years to come!

BBC, DOCTOR WHO and TARDIS (word marks and logos) are trade marks of the British Broadcasting Corporation and are used under licence. BBC logo © BBC 1996. Doctor Who logo and WHO insignia © BBC 2018. Thirteenth Doctor images © BBC Studios 2018. Licensed by BBC Studios.