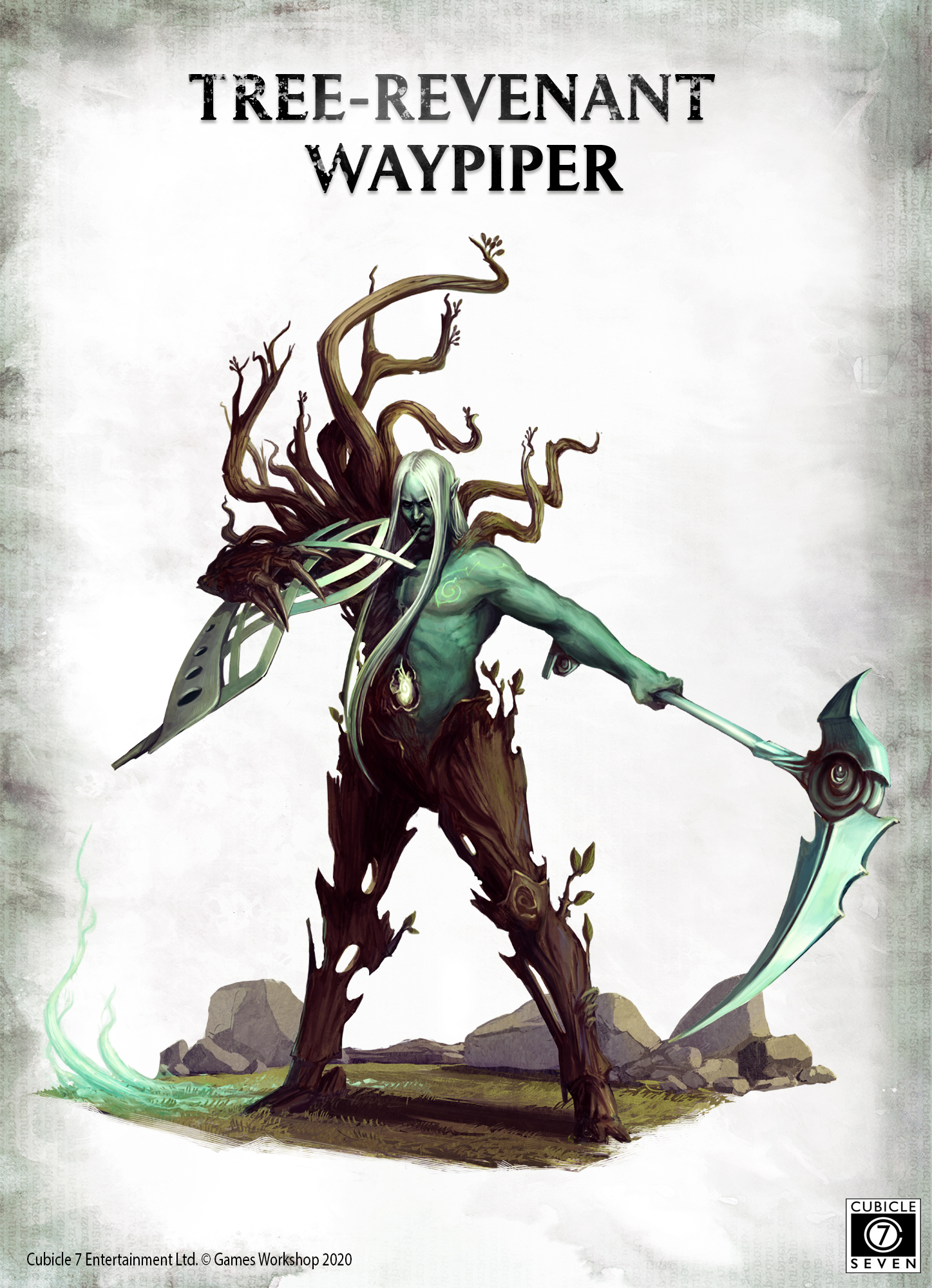 This week we want to introduce you to Clara-Marie Morin. Clara-Marie is an incredibly talented artist who's work you may be familiar with from Warhammer Fantasy Roleplay. We have also revealed some of Clara-Marie's art for our upcoming Age of Sigmar: Soulbound rulebook, check out the Tree-Revenant Waypiper shown above. Catch up on our recent post about this Sylvaneth Archetype here.

It all started with a movie, more precisely, a character in a movie that most people may have forgotten. I was young, maybe 6 or 7 years old and fascinated by Darkness, Tim Curry’s character in a movie called Legend. He wasn’t the hero, far from it. I remember when his devilish character awkwardly tried to charm princess Lily during the movie; in one scene he said something that really resonated with me, despite my young age:

‘All things change lady, the dreams of youth are the regrets of maturity. Dreams are my speciality, by dreams I influence mankind.’

To this day, I can’t entirely explain why I prefer villains to heroes. It may be because they have more obvious flaws. Of course this relates only to fiction not reality, but what Darkness used to say rings true for me, in both my art and how I view it — monsters influence my dreams.

Darkness was the first fictional character that introduced me to the world of fantasy through movies. I began to enjoy fantasy shows, comics, and books such as The Storyteller by Jim Henson, Requiem from Pat Mills, and Olivier Ledroit and The Time Master by Louise Cooper.

As time passed, I found I had more and more interest in fantastical worlds created by  my imagination. My earlier art was based on fantasy and was influenced by the work of Zdzislaw Beksinski, a Polish painter and photographer, science-fiction and horror novels, and roleplaying games.

I've been a gamer since the age of 6 when I used to play on my stepfather’s NES but I only discovered tabletop roleplaying games at the age of 19 with my husband. One of the first RPGs I played was Warhammer Fantasy Roleplay, and I have many fond memories of playing it. One of my favourite WFRP memories is when myself and my friends played the Enemy Within campaign — it  took us four years to complete! Despite the rough adventure, I played my character Katarina, a mutilated Kislevian Elf physician (that’s a long story), throughout the entire four year campaign. She survived everything and I enjoyed playing her even when  we lost many companions during the journey. Of course I have played many games since that campaign, but few of them left their mark on me like the Enemy Within.

There three RPGs that have really stayed with me: Warhammer Fantasy Roleplay of course, Vampire: The Masquerade, and Eclipse Phase. While roleplaying games did not influence my art until later, they are currently one of my most important influences.

My art career, for the most part, was complicated. I used to refer to myself as a self-taught artist but that’s not entirely true. In what seems like another life, I went to art school for a year, unfortunately I met some teachers there who eroded my confidence and I began to think I was not skilled enough. Frustrated and lacking confidence, I chose to study project management for the video game industry.

It was ten years before I considered art as a career again, in part due to encouragement from friends, coupled with the fact that I had never stopped drawing. I worked hard for three years to acquire the skills necessary to become a professional artist. However, I view painting as a lifetime vocation — I will never stop learning. I’m quite demanding of myself when it comes to education!

My initial encounter with Cubicle 7 was pure luck. A year ago I began searching for my first freelance illustrator job. Around that time, my husband had bought the new fourth edition WFRP core book from Cubicle 7 and was following their website for news and updates. He noticed  they were looking for artists and writers and encouraged me to apply; I was concerned I did not have enough experience, but as it turns out, I was wrong!

In January 2019, Emmet Byrne, producer for the upcoming Age of Sigmar: Soulbound RPG responded to my application and since then I have been working for Cubicle 7. Working as a professional illustrator has really helped grow my skills and confidence as I help bring the Mortal Realms to life.

I am delighted to work on such an amazing IP and focus on what interests me most: the bestiary. Over the past year I have also worked on numerous Species and Archetypes, such as the Sylvaneth, the Daughters of Khaine, and the Battlemage.

I am also working on the revised Enemy Within campaign with WFRP producer Pádraig Murphy. My four years playing this campaign has truly given me an advantage while I am able to push my art to the next level  working on environments and scenery for WFRP.

Outside of my illustration work, I am an anatomical teacher for art students. I also practice a lot bouldering with my husband and still enjoy playing video games. I mostly play RPGs such as  Disco Elysium but I have eclectic tastes and play lots of games from other genres like Subnautica, Bloodborne, Red Dead Redemption 2, The Stanley Parable, Fran Bow, and others. I also spend time working on personal projects: science-fiction and horror short stories I like to write using an old typewriter.